Despite what you may think, John Carpenter is a very nice man. You probably remember him as the first person to go all the way on Who Wants to be a Millionaire. His final question required him to identify Richard Nixon as the president who appeared on "Laugh In," at which point he finally used a lifeline to phone his father. "I don't really need your help. I just wanted to let you know that I'm gonna win the million dollars." 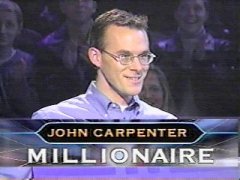 “I regret that it came across as arrogant,” says Carpenter. “Where that came about was that Regis was dissing me that I hadn’t used any of my lifelines and, really, that didn’t matter to me. When I decided to call the Phone-A-Friend, I just thought it would be funny.”

That being said, after Carpenter saw himself on TV, he could understand why people thought he was arrogant. "To be honest, when I was sitting there, I couldn't believe how easy my questions were. A lot of people thought so and they were right. It just happened that I was very lucky that I wasn't asked any questions on anything that I'm not strong in."

In fact, it was the apparent ease of the questions that encouraged him to try out in the first place. He hadn't even heard of the show when he had some of his wife's friends over for dinner. "They were saying, 'You've got to watch this show,' so we turned it on and I couldn't believe how easy the questions were. And it wasn't just the first few, either. I decided I had to try to get on."

Carpenter would eventually spoof his reputation with an appearance on Saturday Night Live, in which even Donald Trump, played by Darrell Hammond, though he was too smug. Carpenter didn't mind, though. "It's SNL. I'd have dropped my pants to have been on that show."

Speaking of which, he also appeared on the HBO prison drama Oz, playing a contestant on a TV show called Up Your Ante, which the prisoners watched. By that time, he had representation to navigate the large number of media and appearance requests that were coming in. But at first he had no idea things would escalate. "I thought I'd be on Regis's show and that'd be it."

Becoming famous ... for a while

The first glimmering that he'd be a nine-day wonder came the very night he won the money. Back then, the show was taped the day before it aired, and since he had consumed so much time reaching the million-dollar question, none of the other contestants had a chance to be on. He decided to make it up to them by taking them to the bar across the street, but already, word had leaked. Watching the close captioning on the bar's TV screen, they could see Craig Kilborn talking about what Carpenter had done.

The show had wanted to put him up in New York for the weekend, but Carpenter wanted to go back to his home in Connecticut. By the time he got there, the media were already encamped outside. He had planned to take some people to a bar and surprise them with the results, but word of that leaked, too, and an unsuspecting friend told Carpenter that "the Millionaire is going to be at Eli's." Instead, he had a party at home.

Since then, he has little interest in doing other game shows, other than a Champions Week on Millionaire, in which he won $125,000 for himself and $125,000 for a local charity. "I've met other Millionaires who are really into game shows and quiz shows, but that's just not me. I'm not part of the trivia lifestyle. I don't really have a burning desire to be on another one."

Jeopardy, for example, is filmed in Los Angeles, far from his Connecticut home and, unlike New York based Millionaire, doesn't pay to bring people to California or for their accommodations.

The one time he did go to Los Angeles for a quiz show, he came to regret it. "I have two regrets about 1 vs 100. One is that I was publicly humiliated on national TV for getting an answer wrong, and the other is that I brought the poor woman playing down with me." The question asked about people who had salads named for them; it also eliminated fellow Millionaire Kevin Olmstead.

Back to the IRS

Today, Carpenter appears to be somewhat grateful to be out of the spotlight. "I still get recognized, but I'm like a curiosity now, not a celebrity. I'm sort of like the TV weatherman."

As for the money he won, most of it was invested and is being set aside for the future, in particular for the future of his young son. And, yes, the IRS agent did indeed pay the 40% he owed in state and federal taxes.

But the show did change his career at the agency. Before being on the show, he had been in collections. "I was the guy knocking on doors, looking for a few thousand dollars, but given who I was, that clearly wasn't going to work anymore. But the IRS was very good to me. They moved me inside to an advisor job."

As it happens, after Survivor winner Richard Hatch was caught evading his taxes, Good Morning America called for a comment. "I said, 'You do realize where I work, right? You have no idea how much trouble I'd be in if I answered that question!"

That sounds like quite a humble response, if you ask us.